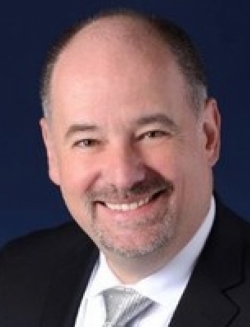 Oleg joined Iotecha as a co-founder, president and CEO in 2016. Previously, he was director of special assignments in STMicroelectronics’ Industrial & Power Conversion Division, where he was deeply engaged in market and technology development activities in the area of Industrial IoT, including the applications of IEEE 1901 powerline communication technology in harsh environments of Industrial IoT. During the last 25 years Oleg has held various senior technical and executive management positions in the telecommunications and semiconductor industries. After graduating from the Technical University of Ukraine (KPI) with the equivalent of a master’s degree in electrical engineering, He began his career as a senior researcher at the R&D Laboratory of the Ukraine Department of Energy at the KPI. In 2015 he was appointed chair of the IEEE Internet Initiative. He is also a past member of the IEEE Standards Association (IEEE-SA) Corporate Advisory Group and the IEEE-SA Standards Board. He also chairs the Industry Engagement track of the IEEE IoT Initiative and created a series of worldwide IoT Startup Competition events. Oleg actively participates in several IEEE standards development working groups with a focus on IoT and communications technologies. He is the chair of the IEEE P2413 Standard for an Architectural Framework for the Internet of Things Working Group. He helped found the HomePlug Powerline Alliance and is its past president and CTO. Oleg has 24 patents to his credit and has been an invited speaker on multiple occasions.

EV controller that is used today in marine applications